0
Login HELP
Facebook Instagram
SHOP ALL PRODUCTS
Free USA Shipping for Orders Over $60
Access Denied
IMPORTANT! If you’re a store owner, please make sure you have Customer accounts enabled in your Store Admin, as you have customer based locks set up with EasyLockdown app. Enable Customer Accounts 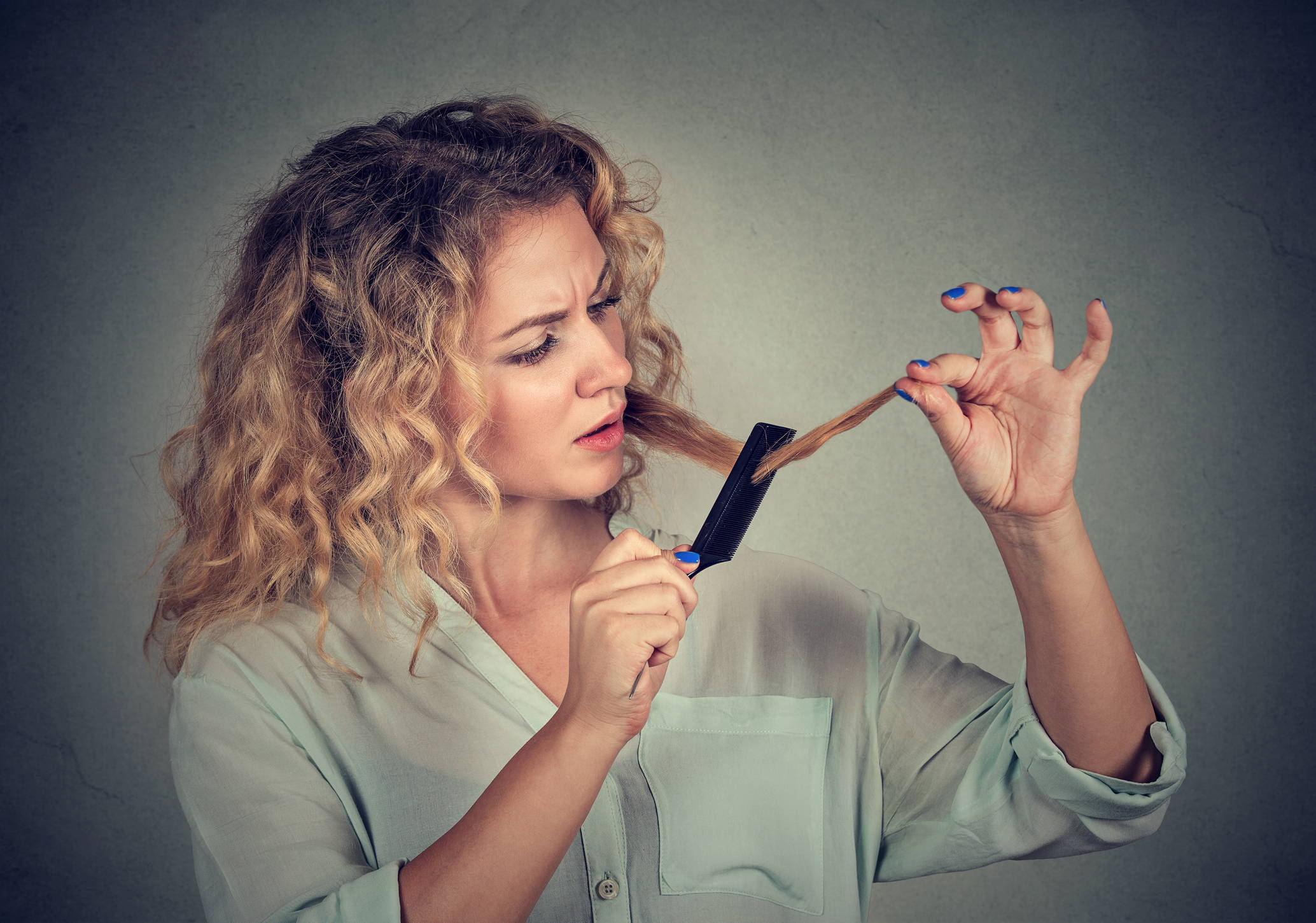 Most often, we associate hair thinning and hair loss with men. From a cultural and social lens, male hair loss is far more acceptable. But the reality is that women can experience hair loss too, and the numbers of women who struggle with this are surprisingly high. Yet, even though hair loss in women is rather prevalent, nobody talks about it. This silence leads to shame, embarrassment, and loss of identity. Let’s learn the causes of female hair loss and what you can do about it.

The Root of Female Hair Loss

Nearly 40% of women will have clinical hair loss. Of that percentage, 95% will be due to androgenic causes. All women will likely experience hair loss at some point in their lives, and the risk increases with age, particularly after menopause.

Genetics is generally the main culprit behind hair loss in both men and women. Androgenic alopecia (or male or female pattern baldness) is the term used to describe genetic-related hair loss. Men with this condition usually see their crown thinning or hairline retracting back on their scalp (where they may see a noticeable ‘M’ of ‘V’ shape developing). On the contrary, women do not generally have a receding hairline. Instead, they start to notice their part line begins to lose thickness, and it starts to widen. Women also lose hair around their temples.

It is unclear what exactly causes androgenic alopecia. We know that it often travels in families, so there is some genetic component. Hair loss from this condition is most likely related to a sensitivity or excess levels of androgens circulating in your bloodstream. Androgens are male sex hormones that are necessary for male growth and development. They also play a role in sex drive and the hair growth cycle. In females, the role of androgens is less clear, but they play a role in making estrogen and also can affect sex drive and hair growth.

Dihydrotestosterone (DHT) is a form of testosterone that affects the hair growth cycle. DHT causes the anagen phase (growing phase) of the hair growth cycle to shorten, and it prolongs the resting phases (catagen and telogen). Thus, once a hair falls out, it takes longer to start growing again. Sometimes, the hair follicles can become overly sensitive to this sex steroid, which causes follicles to shrink and eventually stop growing. This process is called follicular maturation.

Hormones: A Unique Cause of Hair Loss For Women

Men and women are both affected by their hormones. However, women tend to be far more sensitive and susceptible to hormone changes and fluctuations. Indeed, hormonal cycles are very much a part of being female. However, there are certain instances where hormones can severely affect your hair growth patterns.

The postpartum period is a crucial time where your hormones can cause you to lose a significant amount of hair. During pregnancy, estrogen and progesterone influence the hair growth cycle by prolonging the anagen phase. After birth, women lose these higher estrogen and progesterone levels, which causes a good portion of their hair to finally switch out of the growing phase and into the resting (and subsequently shedding) phase.

Menopause is perhaps the most common hormonal shift that affects hair growth. Most women will experience some hair thinning following menopause. It is likely a combination of factors, but the eventual decline of estrogen in menopause, coupled with getting older, can cause most women to have permanent hair thinning.

Autoimmune Conditions and Other Diseases

Although genetics and hormones are the leading causes of hair loss in women, we must note that certain health conditions (including the medication used to treat them) can cause hair loss. Women are far more likely to experience autoimmune disorders compared to men. Examples of these conditions include Hashimoto’s Thyroiditis, lupus, and rheumatoid arthritis. In all of these conditions, women can experience some degree of hair thinning. Although rare, there is also an autoimmune condition called alopecia areata, where your immune system attacks your hair follicles, which causes patches and balding.

We all experience stress daily, but sometimes stress becomes severe. Whether you have chronically high stress levels or you had a particularly stressful event occur, stress hormones can alter your hair growth cycle. Stress-induced hair loss is called telogen effluvium, and the majority of people will experience this in their lifetime. Typically, some type of stressful event will cause your body to release high cortisol levels, which reach your hair follicles. People usually start to shed more hair than normal about 120 days or 3 months following the event because of how the hair growth cycle works. Normal hair shedding is between 50-100 hairs a day, but you can lose around 300 strands daily in telogen effluvium.

Examples of stressful events that may lead to hair loss include:

Telogen effluvium is temporary, and your hair usually grows back. However, people with chronic stress can have prolonged hair loss if they cannot keep their stress levels in check.

Our #1 Best Seller For Telogen Effluvium

What Can You Do About Female Hair Thinning

Because most causes of female hair loss are due to things you can’t really change (like your genetics and hormones), it may seem like there is little you can do to prevent hair thinning. Fortunately, that is not the case, but most of us do not know about our options because no one talks about hair thinning.

The first thing you need to do is identify thinning as early as possible. Now that you know what can trigger hair loss, you can be more mindful of it, especially if you are approaching phases like childbirth and menopause. Keep an eye on your part line to see if you notice it thinning or widening. This area is likely the first sport where you will see changes.

Next, you want to make sure you are always supporting your hair, whether you are currently losing it or not. Taking a hair supplement like the REVITA Nutraceutical Tablets can help ensure you are getting the nutrients you need to support healthy hair.

Taking good care of your hair is vital at all times, and it is imperative to care for the hair you do still have once it starts thinning. Using a good shampoo that gently cleanses without drying out your hair is key. However, washing with a shampoo that also helps with hair growth will make a big difference in your hair thickness. The REVITA High-Performance Hair Stimulating shampoo and conditioner can combat hair loss due to some of the peskiest causes, including androgenic alopecia and hormonal hair loss.

Finally, anyone struggling with hair loss needs to regularly counter the losses by using a topical hair re-growth solution containing Nanoxidil 5%. Nanoxidil is a powerful formulation that penetrates deep within the hair follicle to stimulate growth. Women require unique care when it comes to re-growing their locks, which is why DS Laboratories has specifically designed the SPECTRAL.CSF Revitalizing System to combat hair loss without affecting your ability to style it.