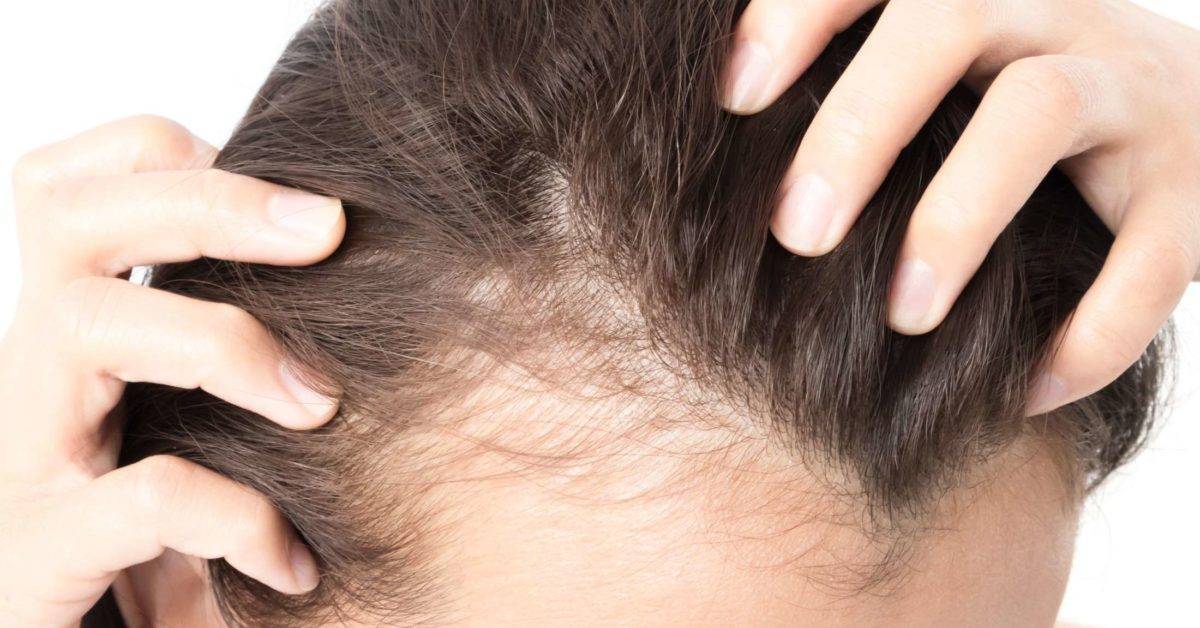 Most types of hair loss follow a specific pattern, which can make it easy to diagnose. When hair loss does not follow a typical pattern, like one-sided hair thinning, it can be challenging to determine the cause. To successfully treat hair loss of any type, it is important to know what is behind the hair loss. Treating the underlying cause is often the best way to stop hair loss and encourage regrowth.

There are certain patterns of hair loss that we commonly see, such as male- and female-pattern hair loss (also known as androgenic alopecia). Male pattern hair loss is often the result of genetics or an excess of the male hormone dihydrotestosterone (DHT). Male sex hormones, called androgens, play a significant role in regulating the hair growth cycle. When DHT levels are high, it often shrinks the hair follicles, which causes you to have shorter and thinner hair strands. Eventually, high levels of DHT may lead to baldness. Male pattern hair loss can show up with thinning on the crown of your head, at the vertex (in an M or V shape), or a receding hairline.

Like males, female pattern hair loss is related to genetics and hormones. It is often passed down through families and frequently occurs after women reach menopause. Hair loss in women is usually the result of shrinking follicles that grow thinner hair that is more prone to break. Most women with female pattern hair loss will notice thinning around their part, their temples, or even a widening of their part. Generally, women will also experience hair loss all over the head.

Another common pattern of hair loss is one that is temporary but results in significant loss all over your head. Telogen effluvium is commonly seen in both men and women and is caused by a stressful event. Normally, people lose between 50-100 hairs each day, but in telogen effluvium, a person can lose around 300 hairs daily. Unlike male and female pattern baldness, telogen effluvium is temporary but it only resolves once the trigger that causes hair loss goes away. For example, triggers of telogen effluvium include surgery, illness, trauma, grief, childbirth, and major life changes. Typically, this condition starts 3 months after a stressful event, and then you will begin to notice re-growth between 6 months to a year following the event.

We often know what causes the most common types of hair loss listed above, but what about less common forms, such as one-sided hair loss?

What is One-Sided Hair Loss?

One-sided hair loss is exactly what it sounds like - it is where you have noticeable hair loss on only one side of your head. Sometimes, it happens in discrete patches whereas other times it can cover the whole side of your head. Usually, hair does not fall out all at one time. Rather, it is a gradual thinning process that may even lead to bald patches depending on the cause. In some cases, hair thinning on one side of your head can be the sign of a serious medical condition, so it is important to talk to your doctor at the first sign of this pattern of hair loss.

One-sided hair loss is often the result of some form of trauma. This may be from severe trauma caused by a head or scalp injury or surgery on your head. Or, it may be from trauma caused by hairstyles and treatments that cause inflammation and scarring on your scalp. Examples of styling techniques that may cause trauma include:

All of these styling techniques can damage your scalp and hair follicles through traction or chemical and thermal burns. Usually, we apply techniques like perms all over the head, but certain hairstyles or even mistakes can lead to one-sided hair loss.

Certain skin conditions can affect the scalp, causing hair thinning. These conditions may include lichens planus, psoriasis, sebaceous dermatitis, and tinea capitis. Sometimes, it is not the condition itself, but rather our reaction to it that causes hair thinning. For example, many of the mentioned scalp conditions can cause us to itch and pick at flakes. Frequent itching can damage follicles through trauma and inflammation caused by constant itching.

It is normal for people to lose hair as they age. Usually, it occurs as general thinning all over the head, but sometimes it can be worse on one side.

Sleeping On The Same Side

You may be exerting constant pressure and applying friction from your pillow if you only sleep on one side of your head. Try to fall asleep on the other side to increase circulation to the follicles on your favored side.

Some people perform repetitive behaviors like pulling, playing, twisting, or combing their hands through one side of their head. These often subconscious behaviors can weaken follicles and causing thinning and breakage. An extreme form of this is the psychiatric disorder trichotillomania.

Where To Begin When Treating One-Sided Hair Loss

Start by assessing plausible causes of your one-sided hair loss. Try to make changes if hair thinning is related to behaviors, such as how you sleep or subconscious behaviors. If you style your hair with damaging products or treatments, give your hair a break and ask your stylist to give you a low-maintenance hairstyle. Finally, as hair thinning on one side of the head can be caused by medical conditions, it is essential to meet with a doctor like a dermatologist to examine your scalp and review your symptoms.

When it comes to treating one-sided hair thinning, the products you use matter. Indeed, even when your hair is happy and healthy, products are essential. Your hair and skin act like a sponge, which soaks up everything in your environment. Because our hair and skin are continuously exposed to harsh chemicals and elements, our shampoos, conditioners, hair loss treatments, and even supplements should only contain the best ingredients.

DS Laboratories offers cutting edge hair re-growth products that fight some of the most difficult to treat causes of one-sided hair thinning, including androgenic alopecia. These products also emphasize the importance of using ingredients that increase circulation and decrease inflammation on your scalp. To find products that combat one-sided hair loss, shop the Revita line for complete hair health and regrowth.